Helllooo! I’m actually writing this post whilst sat outside, tanning my legs as Spring has FINALLY arrived!

So, this past weekend I celebrated another holiday that I’d never even heard of before! Cinco De Mayo! A Mexican holiday which commemorates the Battle of Puebla where on May 5, 1862, the longshot Mexican army defeated a larger and better-equipped invading French army (I hope that’s right because I got it from Wikipedia👀). But I think for most Americans it’s just a great excuse to enjoy tequila, sangria, margaritas, tacos and nachos for a day and to dance around in sombrero hats (or in my case, a large blow up taco hat😂)!

Sean and I decided it was going to be wayyyy to crowded at any of our favourite Mexican restaurants to try to get into any on Saturday night. So instead, we thought we’d have our own little party with homemade sangria and nachos (I even made the guacamole myself!).

The Sangria and guacamole turned out so good that I thought I’d share the recipes for this weeks blog post.

I spent the morning in the sun while Sean worked on his car and then once he was (finally) done we headed to the store to buy everything we needed to make our Sangria and Nachos! Our theme tune for this little store ride was Cardi B’s ‘ I like it’ to get us in the mood😂

I obviously had to demand to stop at Party City to see if there was any Cinco de Mayo decorations left. I actually really wanted a sombrero hat more than anything but they didn’t have any left (which explains the giant blow up taco hat!)

Once we had everything we needed we headed back home to start on the Sangria! This was the first time I’d made white Sangria and after reading a few recipes online I got the gist of how it went. Sean and I like our drinks a little stronger that any recipe was giving so we just kind of did our own thing.

Here’s what you need:

Three bottles of fruity dry white wine (whatever is your fave!)

Some type of Orange liqueur – we went with Patron as, like I said, we like our drinks strong.

First things first, you need to chop up all of the fruit. Chop up as much as you want and however you like it. I like having some smaller bits and some bigger pieces, but that’s just my preference.

Step two, throw all the fruit into the drink dispenser and add the three bottles of white wine. 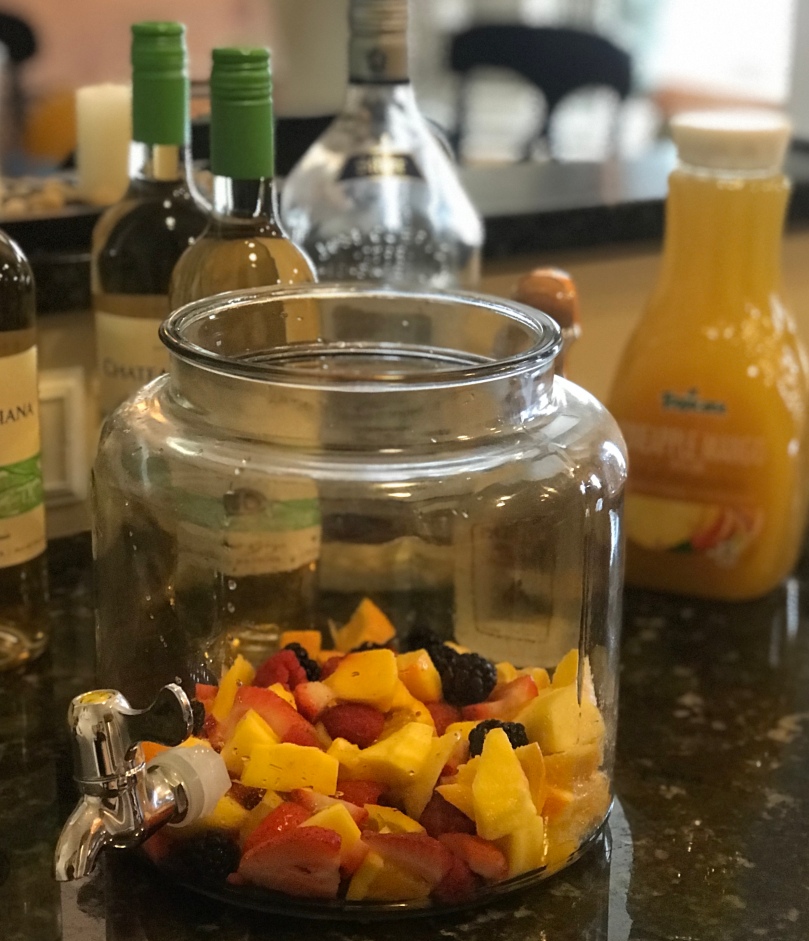 If you decide to make it stronger… add in the tequila!! To be honest, we didn’t measure this out. Sean just poured a load in🙈 I would suggest adding 100ml at a time and tasting it until it’s perfect!

Once you’re happy with the taste, give the mix another stir and then place the dispenser in the fridge for a minimum of two hours. The longer you can leave it the better as the fruit juices will just add to the yummy taste!

Whilst the Sangria was chilling I started on the guacamole! Again, this was the first time I tried this but after reading a few recipes I figured it couldn’t be that hard!

Step one, cut the avocados in half (lengthways) and scoop into a bowl and add a tsp salt, pepper and minced garlic.

Using a fork, mash up the avocado thoroughly making sure there are no lumps. Once you have a smooth creamy mix, place in the fridge with foil over the bowl.

Now chop up the tomatoes, onion and garlic into really small pieces and place in a bowl. Add another tsp of salt and pepper.

Next, cut the lime in half and squeeze one half into the onion, tomato and garlic mix. Stir everything evenly.

Step five, stem the cilantro and mince into small pieces. You can add as much or as little cilantro as you like!

Taste the mix and depending on your tastebuds you may want to squeeze in the other half of the lime and add more salt, pepper and minced garlic.

Once it’s perfect, place in the fridge with foil to cover, until it’s time to serve!

Sean did help a little with the guacamole… he chopped the tomatoes and peeled the garlic! Haha. Then he made the house look pretty with the decorations we had just bought. 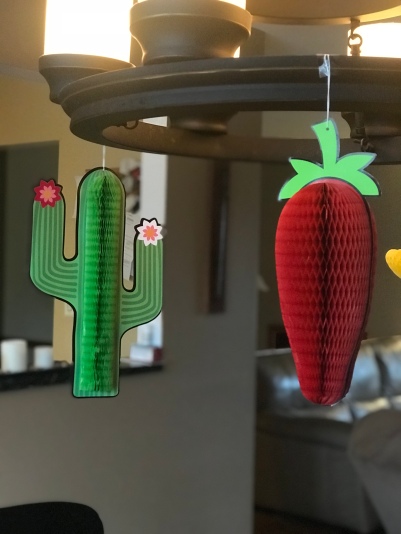 We actually messed up a little as I had cooked enchiladas earlier in the week but if I had known about this holiday I would have saved them! But at least we had the nachos!

There’s really no recipe to share for the nachos… I basically just layered tortilla chips, salsa, jalapeño and A LOT of cheese!!

After a couple of hours the Sangria was gone and the nachos we’re pretty much spent, so I’d say they were success!

I really enjoyed cooking and making the Sangria and I thought of it as a little practise for when we have people over in the summer once the pool is open!

I think Sean and I make pretty good party hosts and we are ready for summer ’18!!!